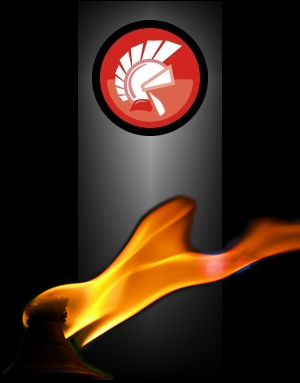 We reached at the final of our poll and we are ready to present the one who will receive the “Delphi Legends Community Award” this year.

First of all, a big thank you for all which voted (you are approx. 500 coders who voted). We should also be grateful to the Team members who passed by and casted also their vote, but, most importantly, we applaud the Embarcadero’s decision to give this year the “Spirit of Delphi Award”, hence we happily renamed our prize. If you want to review once more who were the finalists you can have look at our previous post.

But let’s advance to see the prizes and comment accordingly… Also, at the end we’ll have also our classical pie chart with the percentages.

The Golden Helmet and so, the Delphi Legends Community Award for the year 2009 goes to…

Yes, you heard right. In fact, in my humble opinion this prize should go to the entire Delphi PRAXiS community who was mobilized in an extraordinary way by Sebastian Gingter – his post here (in German). It was impressive to see each day more an more submissions for the main administrator, host and developer of Delphi PRAXiS from 7 years, for one of the main organizers of Delphi Tage (The Delphi conference in Germany) from 5 years, for the driving force behind Delphi-Reference search engine as a humble reconnaissance of his efforts.

And let us not forget that it was way harder for them to fill the entire name in the ‘Other’ field rather than choosing someone else with a single click. (In fact his name was written in various forms – at the end the results are aggregated). 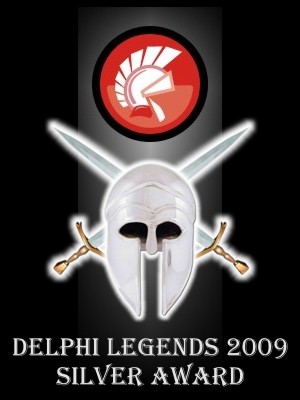 We all know who is Zarko. But what many of you don’t know is that one of the finalists (Primoz Gabrijelcic – or ‘Gabr’ as we know him 🙂 ) posted in a Slovenian forum a call for vote but he asked them to not vote for him – (original post here, translation here) he promoted there his favorite (Peter Below) but since is a Slovenian forum and Zarko is close the vast majority of coders voted for him.

I think that we’re not mistaken too much if, for the above post, Primoz Gabrijelcic should receive the Nobility Prize of Delphi Legends Community Award: 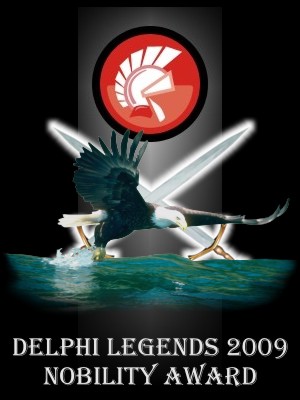 But, on the other hand, Primoz’s efforts weren’t spent in vain because… 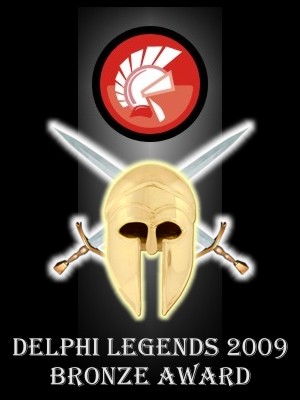 …here I just want to mention the comment of (most probably) the oldest programmer around here (Ronaldo Souza – he has more than several thousand years) which said:

Peter Below: saving our asses since the last Ice Age! 🙂

And, finally, let us not forget the others. All the coders which received more than 1% from the total number of votes, we generously give them the ‘Community Nominee’ badge:

…in this order. As you see Andy Hausladen (the last winner) is again on top. There were also other nominees: Barry Kelly, Bob “Dr Bob” Swart, marc hoffman, Dmitry Arefiev, Nick Hodges and …Bill Gates. Hmmm… all the names are very logical. Ok, almost all the names… and I do think that their name says a lot about what a community expect from someone who makes money from Delphi: support, communication.

And now let’s look at our pie: 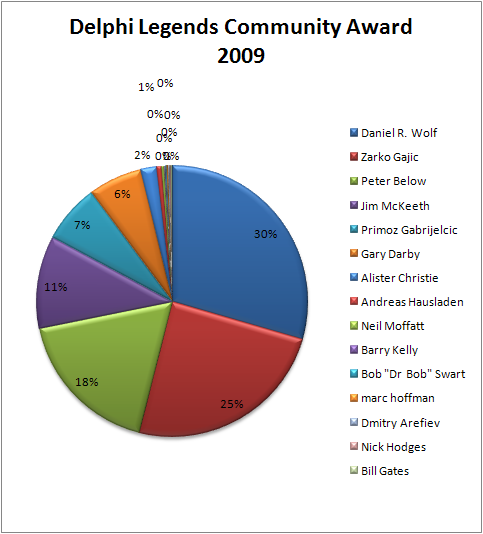 …and if you think that the above resembles with the Gospel according to St. John, you’re right. Because I do think that nothing is more actual in our situation.

PS: The ones who won the prizes are encouraged (if they wish, of course) to use freely on their site (or everywhere they like) the above badges (scaled or not). Anyway the community recognition is the thing that matters.